combining a couple of interests

The big news, if you happen to be a fan of Diana Gabaldon and her Outlander series of books, is the fact that the first book, Outlander, is being made into a series which will air on Starz (in the US) this fall. That's interest number one—I rather enjoy these books. :-)

The second one is crafting, and more specifically, rubber stamping. My idea to combine these two came from a photo that I'd seen that was taken and posted on Twitter by Matt Roberts, one of the producers of the show. It was a shot of the actors portraying the main characters, Jamie and Claire, taken outdoors in minimal lighting. It was very atmospheric, and it stuck in my mind. After a few days I finally downloaded it and converted it to grayscale, thinking that it would look wonderful as a silhouette and that it just might be an image that would lend itself to being carved in rubber. I do like the look of hand-carved stamps. Here's how it turned out. 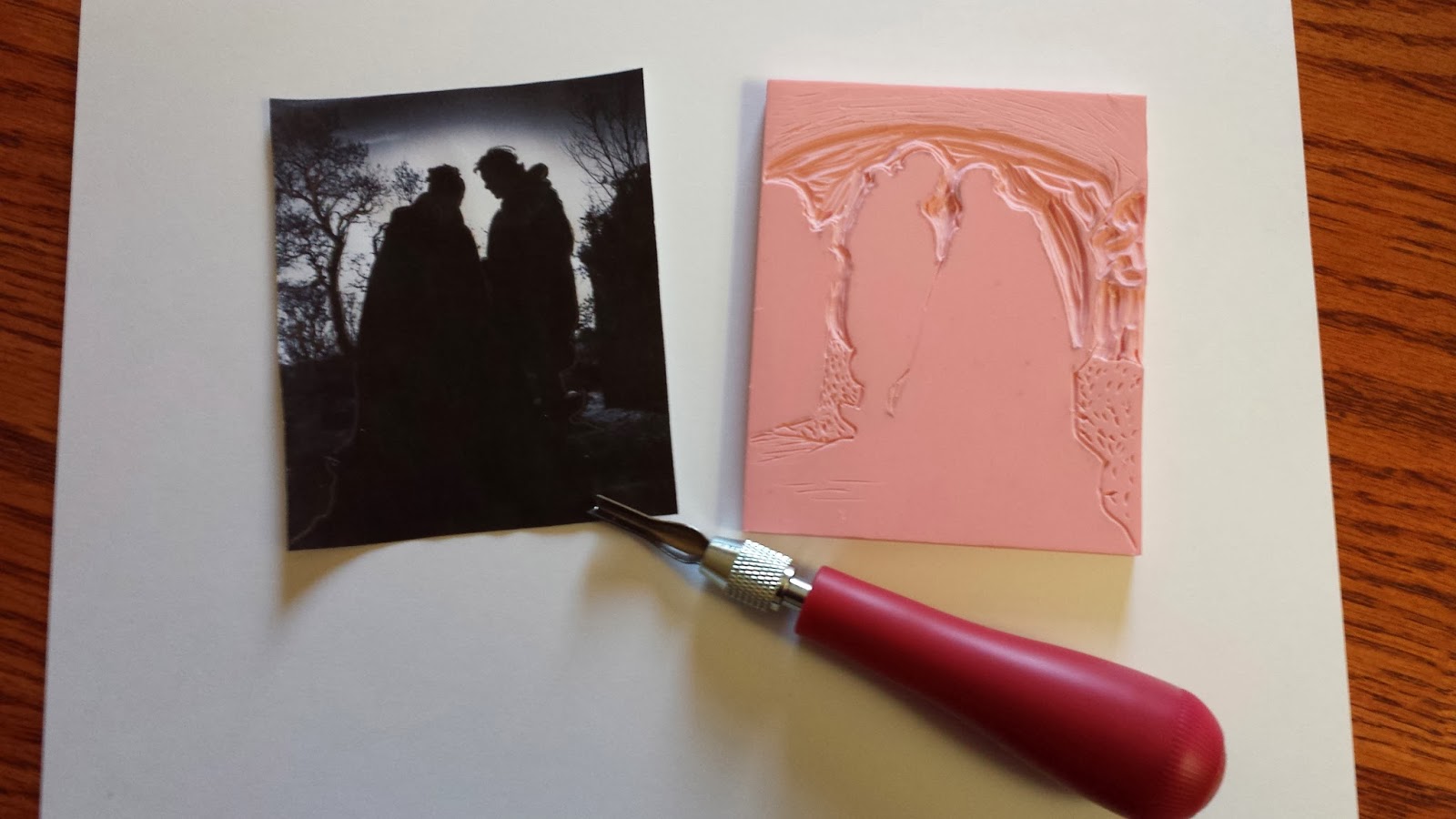 That's the edited photo and my subsequent carving up above. 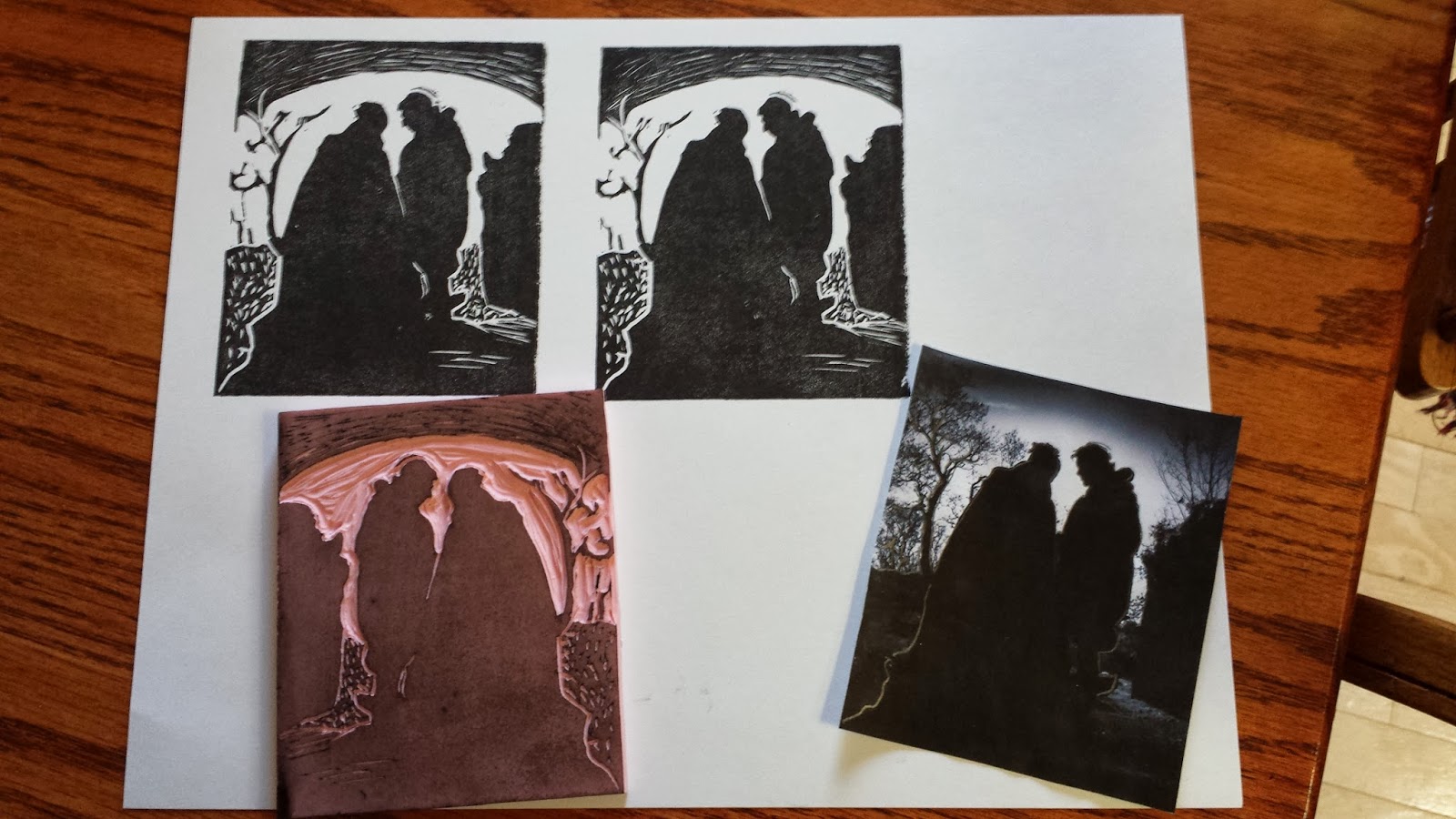 And this is how it looked when I inked it up with some Versafine and stamped it. Didn't get Jamie's nose quite right and I tried to correct it a bit (hence the second stamped image post nose job), but all in all, not too bad for a first try.

Holiday greetings to any and all who may still be following this blog. Color me impressed that you've not given up and unsubscribed by now! :-) I know that it's been a long time since I've published anything.

Here's a photo of the card that I made for this year's card exchange. I've mentioned before that I've been a member of an online group for fans of Diana Gabaldon, author of the Outlander series. The books are set in Scotland and feature Jamie (an 18th century red-headed kilted highlander), Claire (WWII era time-traveling nurse and Jamie's soulmate), and a circle of standing stones. All of this in mind, the images and font of the card hopefully make sense. 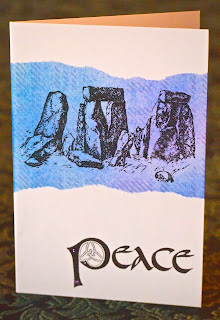 I was actually ready to break out fun tools for card-making. I love embossing, embossing/die cutting machines—all of the fun stuff that's out there now. I've found that I'm really drawn toward clean and fairly simple designs though. I don't care for a lot of layers and bling. I also like my cards to be easily mail-able and share-able. This card is a good example. I wound up pulling out some of my oldest trusty tools and techniques: color dusters, dye inks, post-its for masking and creating torn edges, Versafine onyx black ink for a crisp sentiment impression, and just a touch of Stickles to add some extra spark. It was a fun version of my own kind of time-traveling, now that I think about it. :-)

So, happy holidays! And for those Gabaldon fans who occasionally get by here, I hope that you're well aware of the fact that Outlander is well on its way to being on the small screen next year. Get your subscription to Starz and get ready to see that book come to life. If you haven't checked out this series and you're a reader who doesn't mind tackling a large book, give Outlander a try. It's the first book and well worth the read.

Have a great end to this year and best wishes for a wonderful 2014!
Musings posted by Jay at 8:24 AM 8 comments:

This was a very lean year for crafting for me for various reasons. I kept up with the crafting world, but didn't sit down and create. Maybe I just needed a break. Who knows?

But when the holidays rolled around, I felt the need to jump back into it. I've been a longtime member of an internet fan club devoted to Diana Gabaldon and her Outlander series. For the past several years, many of us have participated in a holiday card exchange, and it's great fun to send cards and receive cards from all around the world. I've always made my cards and decided that I didn't want this year to be different. So, I started brainstorming, and this was the first card that I came up with. 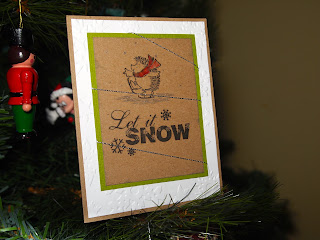 The Penny Black hedgie image was fun and has a humorous connection to The Books. I got to use an embossing folder (Sizzix) and my Vagabond that had been sitting and gathering dust. (GASP!) I've always liked the look of the kraft card stock  I liked the card, but I didn't love it. Plus, I thought it was kind of the same old thing that I'd done before, from a design standpoint anyway.

It was back to the drawing board... but wait! I'd been "saving" cards that caught my eye on my Cards to CASE board on Pinterest. I knew that I'd been attracted to the simpler and cleaner designs lately. I browsed the board to see what else they had in common and to see if I could find some inspiration. The following card is what I came up with. 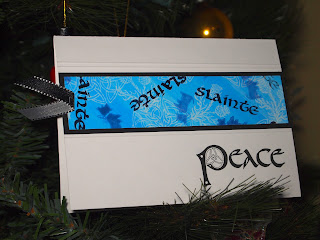 I went the cleaner and simpler route with a panel of color on solid white card stock and the sentiment in the lower corner. Since I was making a large number of cards, I opted to go with a panel design that would allow me to make many in one fell swoop. I ended up doing a resist on glossy card stock using Perfect Resist and dye inks, then stamped over the whole sheet with black and navy blue permanent inks, collage-style. All stamps used in making this card front were by Scottish Borders Stamping, by the way. I cut out the strips, mounted them on black card stock and adhered them to the fronts of the cards, later adding score lines and the sentiment. 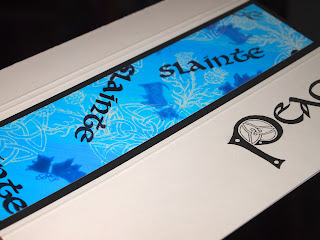 This is a closer look at the front panel. I liked it! The whole design felt more up-to-date. 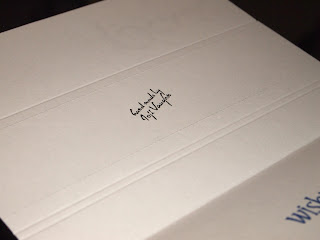 But after looking at the card a bit more and trying to decide how and where to add just a bit more embellishment, it occurred to me that the center panel of the card front could double as a bookmark, for when the holidays were over and the decorations and cards taken down. On subsequent cards, before adhering the stamped panel, I added a couple perforated score lines that I tried to show in the above photo, taking care to run my adhesive between them so that the panel could be detached easily. This in mind, I added the ribbon to the edge of the panel using a mini stapler. Done! Happy! Finished in time to send them out in timely fashion, too.  :-)

So, this is my 2012 post. I hope this gets my creative juices flowing again. To those still checking in, I wish you a Happy 2013 with lots of time for creating and doing all of the things that let you relax and recharge.

Yes, here I am, appearing out of the crafting void. Life has been keeping me busy doing things other than stamping and cardmaking, but I had to make cards for the holidays!


Here's what I made for this year's holiday card exchange (at an author fan site of which I've been a long-time member): 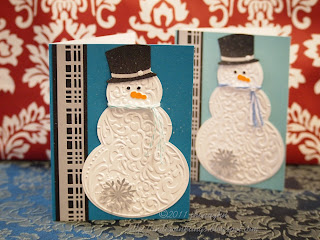 Since I knew that I'd be making a bunch of cards, about forty, I tried to keep it simple. HA! Never works out that way. I just had to keep embellishing and adding small touches here and there. I do like how this turned out though.


So I started with precut and prefolded cards from Michael's Recollections line, conveniently already on clearance. The snowman was made using a Sizzix Bigz die and embossing folder combo (Snowman & Hat)—make your die cut then run it through your machine of choice inside the embossing folder. Worked great! I'll just add in here that I used the Sizzix Vagabond machine for this part of the process and it made it extremely quick and easy. I even cut out the hat from black cardstock in the same pass. I just laid the white over the snowman and the small piece of black over the hat and ran it all through. The snowman was embellished with Glaze pens for the eyes and carrot nose and then a snowflake from the Martha Stewart line of punches. I added the silver hat band with a silver metallic marker and dabbed on a spot of Frosted Lace Stickles. Another Martha Stewart punch, this time a border punch, helped me create the plaid border. Martha's baker's twine formed the scarf. The final touch was a couple of spritzes of Perfect Pearls Perfect Pearl Mist. Love that added shimmer and snowy look!

out of the deep freeze

This week I got to experience a first--I've lived in the Midwest all of my life and am used to seeing winter storm watches and warnings. The blizzard warning was a new one for me! Now as it turned out, I live just far enough east that the worst of the storm missed us. It left some snow and ice though, which look rather pretty.
This photo struck me. I happened to catch her just as she was taking off from her rather snowy perch. 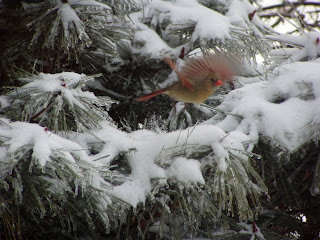 In a way, that's the way I feel about this blog. I've been frozen in the same spot for a while, now it's time to take off again.
So, here's what I worked on today. 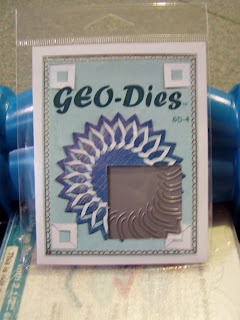 This is a Pop-Up die by GEO-dies. It looks like a sun or a sunflower, so it appealed to me. 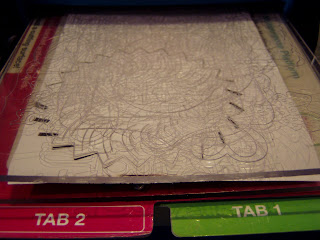 I used it with my Big Shot like I would any other wafer-thin die, between the two clear cutting pads on top of my multipurpose platform, tab 2. 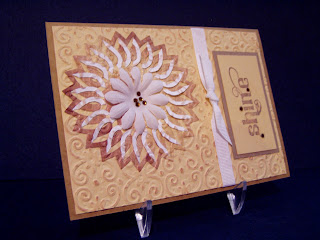 After turning back and folding the cut outs, I adhered it to the yellow cardstock and put it through my Big Shot inside the Sizzix Flowers & Vines textured impressions folder. I inked the embossing using Memento dye ink then embellished with a Prima flower, some bling, and a sentiment by Studio G. 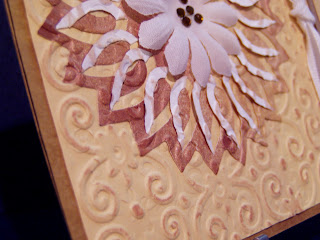 Here's a closer view of the embossed pop-up die.
This technique is a twist on inlaid embossing that I've seen done several places. It's been done with simple die cuts and with Prima flowers. It struck me as being similar in concept to Cuttlebug quilting. Here I liked the added visual interest that the pop-up die cut lends to the design.
Musings posted by Jay at 2:14 PM 16 comments: