scoring late in the game ;-)

I wanted to share a few cards that I made over the holidays that I didn't post here. They were originally made for sharing in the Scor-It newsletter, but it looks like they've started up their own design team now so I'll go ahead and share these here.
I made these using the full-size Scor-It board and Scor-It ruler. I like finding unusual ways of using scoring on my cards and these are a couple of great tools for doing just that. 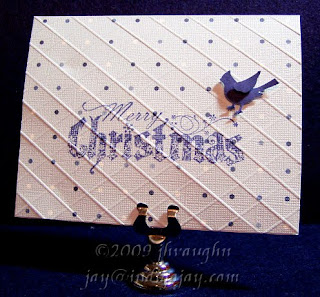 Starting simply, a grid pattern can be easily made using the new ruler and it can add visual interest to a card front as above. This is a card that came in a box of premade, prefolded, blank seasonal cards. I added the stamped sentiment, the punched bird, and the grid scoring, and just like that it became a more interesting and more unique card. Some touches with a glitter pen would add some fun sparkle, too. I may have to do that.
I also like stamping bolder images on designer cardstocks and papers for making a quick card. 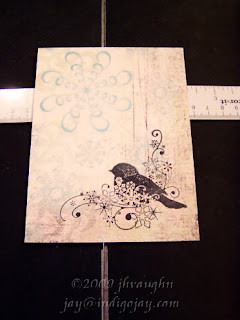 Here I added the flourished bird design to the preprinted card stock. 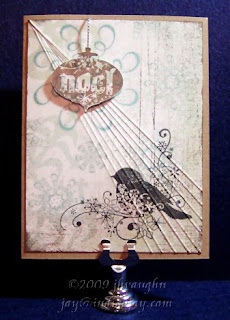 For a special touch, I added some diagonal scores in a pattern that resembles a beam of light. Again, very easy to accomplish using the Scor-It board and ruler. I scored right over the top of the design, after making sure that the ink had dried, of course. :-) I've used this scoring pattern before, using stamped images at the upper and lower corners where the cardstock is unscored. I like the look of scoring over the images themselves, too.
And finally I have a card that took a little more time to make, but I thought that the effect was worth it. This was inspired by a card that I saw on Splitcoast Stampers but done a different way. 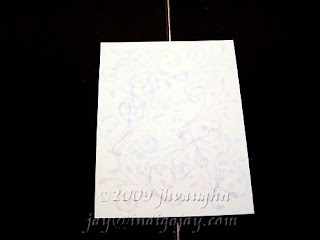 I started out with a piece of A2 size white cardstock and stamped a flourish image multiple times in a couple of colors to make a subtle background. 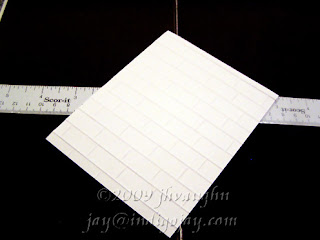 I then turned this face down onto my Scor-It board and proceeded to score a brick-like pattern. I started with horizontal scores 1/2" apart then added short vertical scores to make 1" wide bricks. I staggered the scores to make it look more realistic. 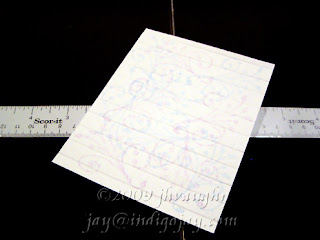 So now I've got that nice background pattern and the scored design. 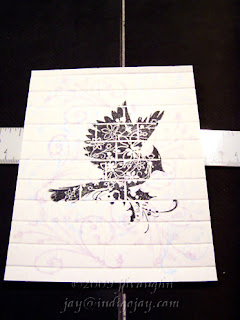 Another thing that's fun about the Scor-It is that it makes such crisp, deep scores. I took advantage of that in this step where I stamped a flourished bird onto the front using black ink. The bird image helped bring out that brick pattern of scoring even more, and I really liked that effect. It's even more stunning with a more solid stamp design, as you might imagine. 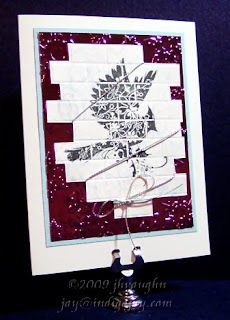 This is my finished card. I trimmed some of the bricks away to give that central image more interest.
Here's a closer view.... 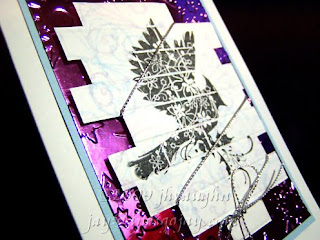 It can be a lot of fun to using scoring in decorative ways. The Scor-It board and ruler can add more than just a professional hinge score to your cards, though that's definitely a great start. :-) Creating 3D projects and using scoring in creative ways on card fronts, layers, and die cuts with these tools opens up a world of creative possibilities.
BTW, it also looks like the Scor-It folks are coming up with more ideas for accessories. The latest newsletter shows pics of their new Position-It. It looks like a fancier version of a stamp positioner. I'll be interested to see what advantages it has to offer over my tried and true Stamp-a-ma-jig. They also have new pink Scor-It boards being released soon. As I recall, it'll be neat because the rulers will have both inches/metric measurements, plus there'll be another size board added to the arsenal, smaller than the original but larger than the mini--made to accommodate A4 size European cards. Oh, and the tool will be stainless steel rather than wood.
Oops, almost forgot to include credits--all of the above card images were by Inkadinkado and stamped using Memento inks. The cardinal in the first card was made using a Martha Stewart punch. The snowflake embossing in the last card was made using a Sizzix textured impressions embossing folder.
Musings posted by Jay at 12:33 PM