Over the holidays I managed to acquire a Slice at a good price. I'd never been all that interested in computerized die cut machines, but the Slice seems to fit exactly what I'd use an electronic cutter for, and that's card making.
That said, I'm sharing a project that I made using my Slice. Is it a card? Of course not! LOL! But I found out that the Slice can cut adhesive backed vinyl quite nicely. I'd been wondering if vinyl would work--it's used with the Cricut, eh? I gave it a try. When I saw that it would work, it started the wheels turning.
Some time ago, I did some glass etching using stamping supplies. It was great fun! It was a little tricky to etch words though, especially if etching the bottom of a plate or something like that. Stamp your words and they'd end up being backward. I left that alone for a while, but then I started playing with the Slice and BINGO! You can cut out letters, letters that could spell words, especially if they didn't already have the words you needed on one of their nifty cards, AND you could mirror the letters! Backward writing would work! That's my theory anyway. I haven't actually tested it yet. I did test the vinyl in unmirrored form. First things first. Had to make sure this would work. 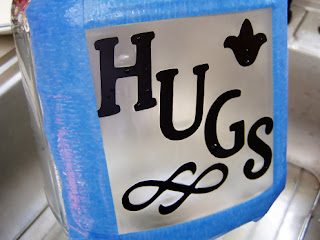 This is several steps into the process. I'd not been planning on sharing this, but then it turned out well and I had to share. So, up above is a glass container with black vinyl letters and flourishes adhered to one side. I used painter's tape to mask off the area that I wanted to cover with the glass etching cream. This is the stage where I'd just rinsed off the cream. The cloudy look to the glass is the etched effect. It was quite clear at the start. 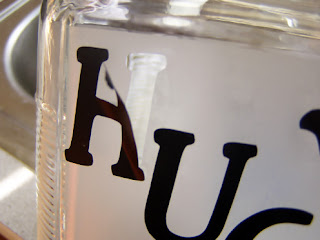 Here I've removed the painter's tape and pulled part of the "H" away. This is the fun part, the point where you really start seeing the effect of the etching. 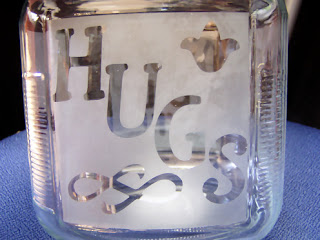 Here it is with all of the vinyl removed. Worked out nicely, I thought! This is a four-sided jar and I etched the other sides using the vinyl technique as well as the Versamark and embossing powder technique that I've described before for some of the images. I can't share those right now (since this is a gift-shhhh!), but they turned out quite nicely, too. :-)
And I'd thought that I'd just be using the Slice for card making.... ;-)
Musings posted by Jay at 1:22 PM