It's a special day! 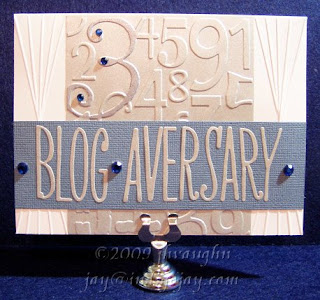 You may have guessed, eh? It's IndigoInklings' 3 year blog-aversary! Yes, it was three years ago that I made my first post here on Blogger. I did it on a whim, never expecting that I'd still be at it years later. I'd started this blog as a way to keep track of cards that I made and how I'd made them. I'd never expected to gain any kind of readership, and things did start out slowly. For quite a while I posted, mainly for myself. After a while I became curious and added a counter, just to see if anyone ever stopped by. I was getting the occasional visitor and the occasional comment. Things really picked up though when I started posting cards that I'd made using Cuttlebug embossing folders in ways other than the traditional put-the-card-stock-in-the-folder-and-roll-it-through method. There was an interest in that and in reviews of tools and punches. People seemed to like the photos and step-by-step instructions for various techniques using dies, texture plates, embossing folders, brass stencils etc in the Big Shot, the Cuttlebug, the original Sizzix.
And so, here I am, three years later, still playing with die cutting machines and their accessories and making cards. I owe part of my motivation to the fact that I know that there are folks who like to come by and visit, so thank you! :-) I still do this mostly for me though. It's a way to relax and is just plain fun!
From time to time I do a recap. It feels like it's time to do that again. I'm going to approach it from the standpoint of crafting. Some of this will be obvious if you've stopped by here before. Some will be first time revelations. Hey, I had to have something new, eh? Here goes....
Die cutting machine: Big Shot, Cuttlebug, original Sizzix--I own all three. I like the Big Shot better by far. I won't get into the pros and cons since I've discussed that elsewhere. I doubt I'll be test-driving the Big Shot Express--I do too much experimenting and would probably break it. I'm passing on the QuicKutz Epic 6, too. Can't see that it offers anything that makes me want to replace my Big Shot.
Card stock: I use Georgia Pacific quite often. I like Neenah or Paper Trey when I want to use good stuff.
Inks: Memento dye inks are the first that I reach for these days. So versatile and I love the colors! I prefer Versafine when I'm really looking for fine details. Nothing beats alcohol inks for polished stone though. Stewart Superior's India Ink is my favorite black ink.
Coloring: I have a few Copics and Prismacolor markers and use them rarely. I like the look of the magic colored pencil technique, but don't use that often either. I've found that I actually don't color much if I can avoid it. LOL!
Dies: I find that when I want to make a die cut these days, I'll put out a folder of Spellbinders dies. They have so many shapes and sizes. They're versatile in that you can emboss with them or stencil with them. Can't beat the Bigz and original Sizzix dies though for cutting through stuff that's thicker than card stock. And the XL Bigz dies can make some really fun stuff. I don't use Cuttlebug dies very often.
Embossing: I like dry embossing. I think that's because I tend to be impatient. I think that's also the reason why I like embossing folders so much. Cuttlebug folders are great due to the sheer number of designs that they offer. Sizzix has the plus of covering a greater area, not to mention that they're packaged in coordinated sets. QuicKutz are similar to the C'bug folders, but I've found that there can be issues with the front and back of the folder aligning properly. Love their big border folders though! Texture plates and Fiskars are fun, so long as you know what to expect--texture, not deep crisp embossing. For the price, these folders all pack a lot of punch. They can be used in a lot of different ways. Just check out my sidebar to see! :-)
Punches: Most of the punches that I buy these days are border punches. The slim design punches by EK Success are my current favorites. Love the designs and the fact that they're more compact. That's not to say that I'm tossing out my Fiskars or Martha Stewart punches though.
Stamps: I used to be a red rubber stamper all the way. I've since unmounted all of my wood mounteds and I actually reach for clear stamps first. Again, ease of use and easy storage are big reasons. Clears and Memento inks seem made for each other, too.
Paper cutter: Making Memories paper trimmer and the 6" base Tonic guillotine cutters are what I use most often. Exacto and a ruler for thicker stuff. Tim Holtz scissors for rubber.
Scoring: I'm a long-time Scor-It user. I'll admit it. I love the look of the scores. After hearing so much about the Scor-Pal, I had to try it. Here's what I found....
In the photos, the Scor-It scored card stock is on the left and the Scor-Pal scored card stock is on the right. 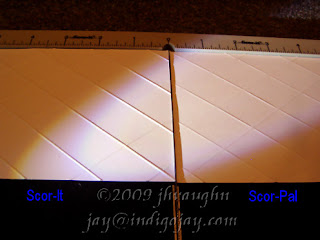 Here a light source was aimed from bottom left to highlight the scoring. 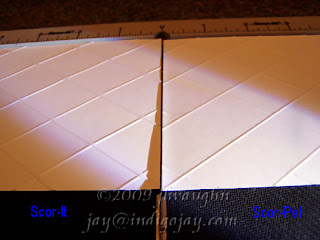 To be fair, I aimed the light from bottom right this time. 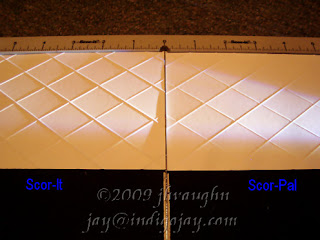 The angle washed out some of the scores, so this time I aimed the light more directly from right to left. 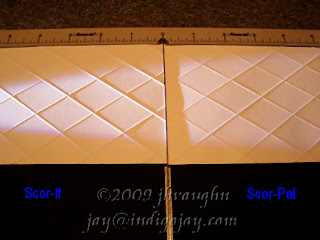 This time the light was aimed from left to right.
To my eye, even without the extra light, the scores made using the Scor-It were more distinct and deep. Having become used to the looks of the scores made by the Scor-It over the years, the Scor-Pal scores don't quite measure up. To me it'd be similar to the difference between an image embossed using embossing folder with vs without a shim. I happen to prefer the more crisp embossing. Other folks may be fine with less crisp. I'll say that for making multiple scores that line up with the Scor-Pal lines, the embossing goes more quickly. That's an advantage. (I'm still tempted to redo those lines with my Scor-It though.) With the addition of the Scor-It ruler to the arsenal, the Scor-It definitely becomes more accurate and versatile, if still perhaps not as quick--and that has more to do with the user though, eh? I'm going with quality of score and still pull out the Scor-It. Love those fun starburst and light beam patterns! Plus I'm not much into box-making. Scor-Pal is good for that sort of thing.
Adhesives: I'm a long time ATG user, the 1/4" tape variety. I use the Scotch 714 and have never had any trouble with the gun or the adhesive. I have small hands and find it very easy to use--I only say this because its size always scares people. I'm not sure why. If you look at the handle, it's quite a manageable size--it's not like you're wrapping your hand around the entire ATG, eh? It's lightweight and balanced nicely. Can't beat the price for the amount of adhesive that you get either. It's by far the most economical and most eco-friendly to boot. 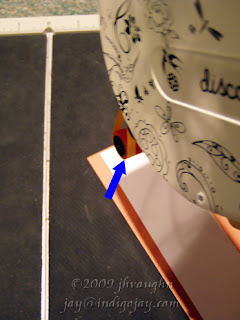 What some folks hate, and what is a disadvantage for lefties, is the fact that the tape runs along the left edge of the roller. I like that! The photo above shows what I see as I sit holding the gun with my wrist in a nice comfortable neutral position. I can see exactly where I'll be laying that tape down as I pull the gun toward me. That means that I can place the tape right along the edge of my layer and I have no trouble stopping right at the edge either. 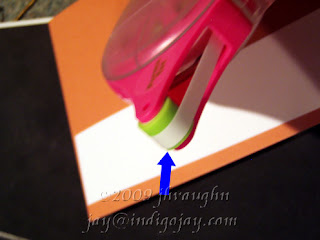 This is a view of the Glue Glider Pro. I picked it up when it was on sale at Hobby Lobby. I'd heard so many glowing reviews that I couldn't resist trying it. Smaller and lighter. Okay. Not big selling points since I don't have size issues with the ATG. Tape unwinds toward the right edge of the roller as I've indicated above. 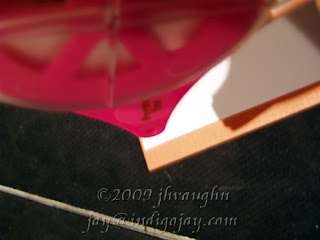 Okay. I tried a number of ways to try to accurately see where I'd be laying my tape down. If I leaned over the top of the Glue Glider and looked backward toward the roller, I could get a fair idea. Didn't work for a good camera shot, not to mention that it was uncomfortable. So, in the photo above, I tried to get a look from the side. Still couldn't see just where the tape was. This was also awkward as far as either having to twist my wrist or lean to the left. 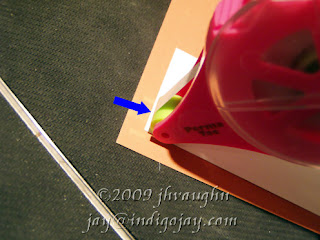 Here I finally just set the roller on the card stock. I'm a bit puzzled about all of the glowing reviews. The adhesive is very good! I'm not impressed by the delivery though. More often than not, the adhesive ran off the edge or too far. Not a biggie to fold it back, but an aggravation. I like my tools to make life easier for me, not more frustrating. ATG wins easily. I like Tombow Quickie glue pen for small die cut letters etc.
As for my card, the sentiment was made using the QuicKutz String Bean border alphabet. The embossed background is the Cuttlebug Number Collage embossing folder. Both were rolled through my Big Shot. The decorative starburst scoring was made using my Scor-It and the Scor-It ruler. I used my ATG to glue everything down except for the letters--I used my Quickie glue pen for those. LOTS of my faves used in the making of that card.
That covers my recap and musings as I reflect over the past three years of blogging. Thanks to all of you who read or follow me here regularly. Thanks to those of you who've taken the time to comment, too. It's appreciated. Plus, then I don't feel so weird talking to myself. :-) To celebrate properly, I'll be hosting three giveaways. I'll make new posts for those. Seems right to have three of them, so stay tuned. I'll put the first one up when I get a chance to take some pics and get them uploaded. I think you all should get to celebrate, too! :-)
Musings posted by Jay at 10:30 PM