Please note: this article was originally published on the Cuttlebug Challenge blog. I think enough time has passed that I'm publishing it here as well so that it can go out to my email subscribers and be linked along with my other tutorials.

Hello everyone! This is Jay from IndigoInklings dropping by for another visit this month at Maggie's request. Recently I read about a technique that was done using the Wizard by Spellbinders. It's called flower pounding. Flower pounding itself isn't new. As you might guess, it's been done using a hammer or a mallet and a nice flat solid surface. Flowers were placed atop paper and pounded to release and transfer the pigment. What was different was that this was done with less effort (and noise!) by using a die cutting machine. I decided to adapt this technique for the Cuttlebug and share it here. 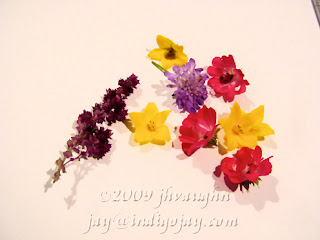 Now thankfully, this time of year there are lots of flowers in my backyard. These are a few that I picked just for this project. Love the wonderful variety of shapes, textures, and colors! 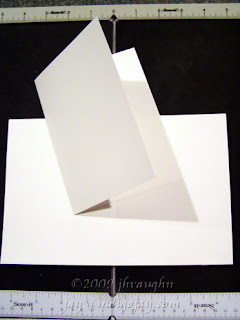 What you need to have on hand for flower pounding, besides some fresh flowers, are your Cuttlebug machine and plates and some card stock or water color paper. What I did was cut the sheets in half and then fold each half in half to make a folder. There's no need to be neat about this. I know my Scor-It is in the photo, but it was there primarily to be a nice backdrop. 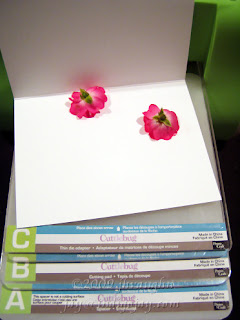 Here is the sandwich that I used for flower pounding: A, B, and C plates, with the flowers placed inside the folder. I've found that the side that releases most of the pigment is the face of the flower, so if you don't use a folder, then put the bloom face down onto your card stock, then cover it with a layer of scrap paper before sandwiching it and putting it through. 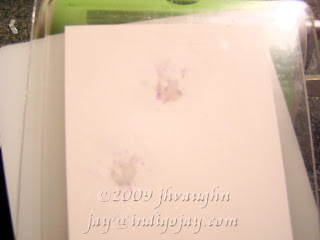 Here you can see that I did place the folder between the plates before rolling it through. You can also see why I used a folder. This can be a juicy project. Depending on what type of flower you use, it can be really juicy! This is why I mentioned that water color paper would also be a good option. 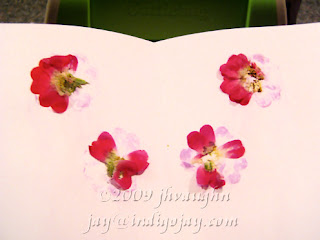 This is what it looked like when I opened up the folder. You can see that pigment has been transferred from these shrub rose blooms to the card stock. 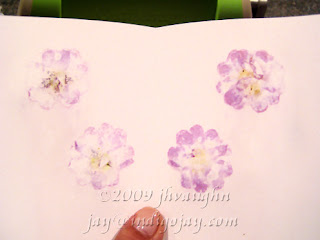 This is how it looked after I peeled the flower petals etc away. Both sides of the folder are potentially usable, so that's another neat thing. 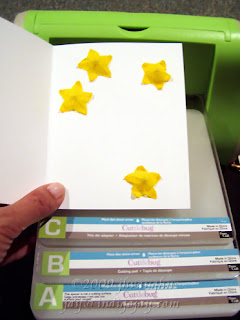 Here is the same sandwich, different flowers. These were much thinner than the first blooms. I had a shim handy, just in case it looked like the blooms needed to be squeezed harder, but I didn't need it. It's a good idea to have at least one or two of them close by though. 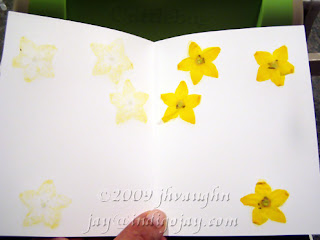 Again, here is the folder opened up. 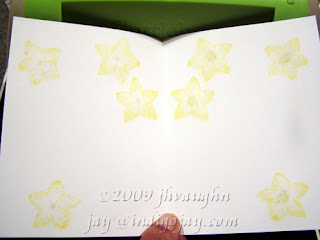 And this is the design that's left once the flowers are removed. You can gently rub the flowers off with a finger. Often you can peel up an edge of a petal with a fingernail then pull it off the rest of the way. I found that using a scrap piece of card stock as a scraper worked nicely, too. 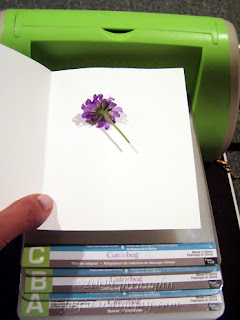 This is one more example with a Bachelor Button. I used watercolor paper for this one. I've had a lot of moisture get forced out of this type of flower before, so I learned from that! 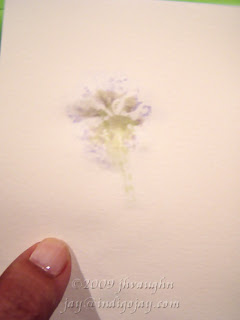 This is one side of the outside of the folder after rolling it through. 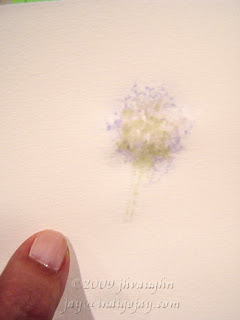 This is the other side. I really liked the colors and the delicate look. 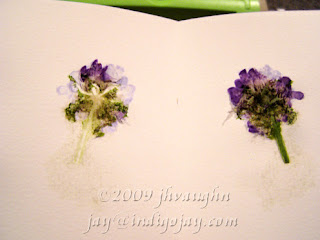 Here is the folder opened up. The flower was squeezed from the top then down toward the stem. This is why I also tended to place my flowers near the edge of the folder that would be going through the machine first. Think of the Cuttlebug as a wringer with all of the pigment and moisture getting squeezed out and forced along as the bloom moves between the rollers. It's much less messy to have excess folder at the trailing edge to catch all of that. Yes, as you might guess, that's the voice of experience. :-) 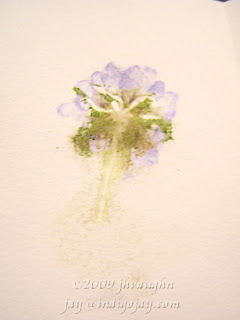 This is one side with the flower parts removed. 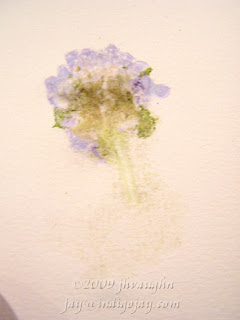 This is the other side. The amount of pigment left by the flowers can be impressive. And don't discount the stems and leaves, or the stamen and the pollen. They can all leave color, shapes, and texture behind. 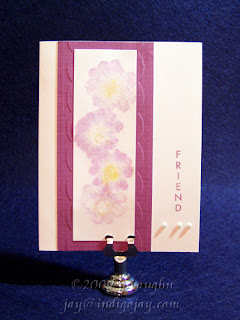 This is a card made with flower pounded shrub roses. Notice the bright yellow that was transferred from the pollen. You might recognize the scalloped QuicKutz border embossing folder that I used as the background for their layer. The sentiment is by Hero Arts and was stamped using Memento dye ink. 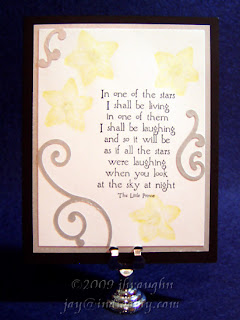 Since the pounded Yellow Loosestrife blooms left behind an image so reminiscent of stars, I paired them with the above sentiment from The Little Prince made by Silver Crow Creations, and I added some QuicKutz die cut flourishes. 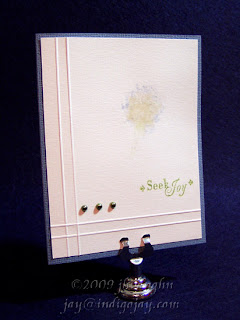 The focus of this card is that Bachelor Button "image" that was on the outside of the folder. As I said, the delicate look appealed to me and I wanted to go with something more subtle. The stamped sentiment is by Hampton Art Stamps and I added the score lines using my Scor-It. 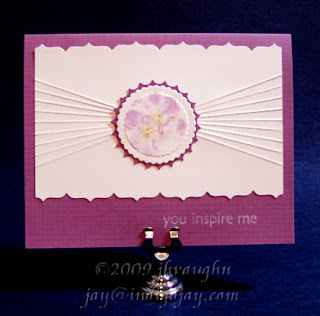 I made this last card using one of the images made with a shrub rose bloom. I cut and embossed it using Spellbinders Nestabilities dies and layered it on top of white card stock with some decorative scoring that I again made using my Scor-It. The decorative edges were made using the Fiskars Upper Crest border punch. The sentiment is by Hero Arts and was stamped using white craft ink.
So, no tips or tricks using embossing folders this time, but I hope that I've inspired you to try a technique that doesn't get much more complicated than going outside and picking some flowers. I've found that fresh blooms work better, by the way. Again, it's that voice of experience. :-) And for those of you who are Big Shot users, or even owners of the original red Sizzix machine, click on over to my blog where I've described how to flower pound using those die cutters.
Have a good day everyone! Enjoy your weekends! And be sure to have fun checking out all of the special features that will be published on this blog in the upcoming days. :-)
Musings posted by Jay at 11:11 AM