about all of this Cuttling....

Embossing folders are a lot of fun. They're an easy way to add texture and interest to cards and, I suppose, to scrapbook pages, too. They can also be used in ways other than just sticking card stock or paper inside the folder and rolling it through a machine. That's what I mean by Cuttling, or what I should probably refer to now as selective embossing, since Sizzix and QuicKutz are now releasing their versions of the plastic embossing folder. I dunno though. Cuttling sounds so much more fun than selective embossing. And little did I know how quickly the term would spread when I first started using it about a year ago.
Anyway, one of the questions that's come up frequently is, "I can't find wood die cuts--can I use something else?" The short answer is, yes! The reason why I use what I use is that it's usually handy, cheap, and easy. So, where I might use craft sticks, someone else might find a scrap piece of acrylic, trim it to size with a band saw, and then use it the same way. It's the same reason why I'll use the backing to Cuttlebug folder packaging as my shims. They're handy. It's repurposing. I think it also gives a good reference point when other folks want to try something I've described. And yep, and I have lots of 'em!
So, here's another way to do diagonal embossing. That post periodically gets lots of hits and I know that not everyone has the narrow cutting plates that I used. You can get the same look using chipboard, and I just want to show that there is more than one way to Cuttle a folder. ;-) 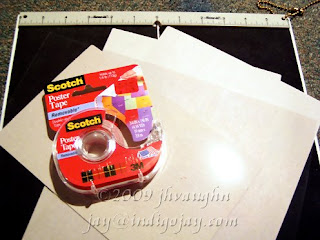 These are just some pieces of chipboard--I get these with stamps from the USPS when I order online. Also pictured are a sheet of transparency and some repositionable poster tape. 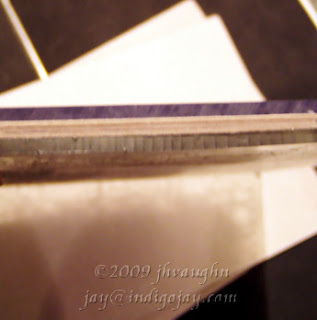 It's a bit out of focus, but what I was trying to show was that 3 sheets of chipboard are close to the thickness of a cutting plate. I wanted to err on the thin side, so I think I managed that. 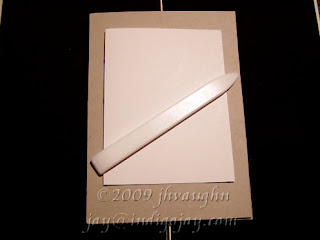 My bone folder is showing how I might like to place a diagonal on an A2 size card. My chipboard pieces are intentionally bigger than the card and than an embossing folder. That gives me some room to play with the position of the chipboard on the folder. Ahhh, the things that you learn from experience. :-) Still narrow enough to fit through the Big Shot and through the Cuttlebug though. I think you can see how the extra size gives you a little room to move your folder, tilt it to change the angle of the diagonal, or whatever. 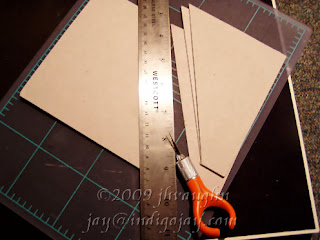 I cut my chipboard on a diagonal with a few passes of a craft knife. 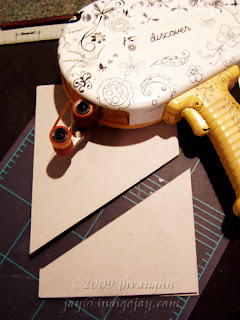 I then glued the layers together using my ATG. 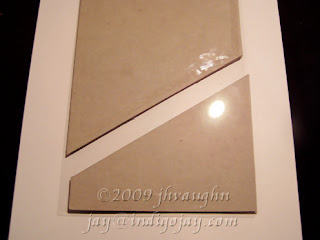 You can just make out the transparency, I think. I glued the top stack of chipboard in place to the transparency. The bottom part I wanted to leave loose since I might want different widths of unembossed diagonal strips on my card front. 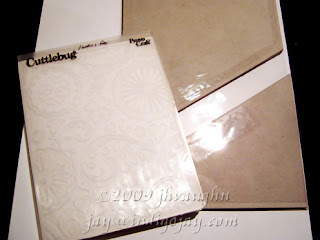 Here you can see that I've put a piece of the repositionable tape on the chipboard. I made it a little less sticky by pressing it to my jeans a bit before sticking it to my transparency. Also pictured is an A2 size card with the card front inside the Floral Fantasy Cuttlebug folder and the back tucked behind. 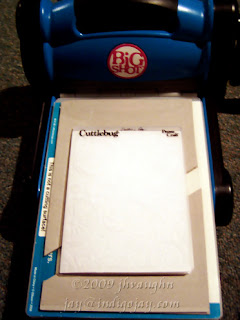 This is how I positioned the folder over the chipboard pieces. The transparency helped keep things from moving but still let me see what I was doing.
The stack was: multipurpose platform with no tabs, chipboard, card inside embossing folder, clear plate. 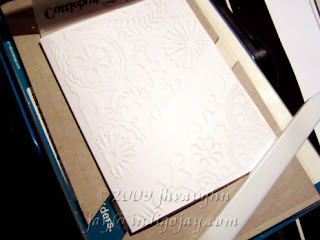 Here is how that turned out. 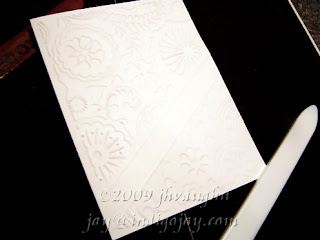 As I've suggested before, you can accentuate the border between the embossed and unembossed areas by scoring. I use my Scor-It. 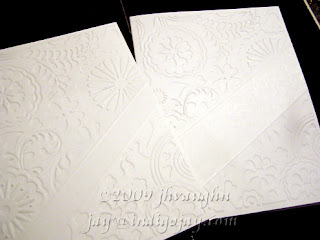 And here's another card with a bigger diagonal strip, just for comparison. 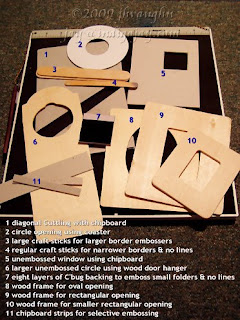 So, to get back to my original point, there are lots of ways of getting different looks by selectively embossing. The above photo shows some of the items that I've used to accomplish that. It's by no means an exhaustive list. These are meant to be suggestions. Everyone probably has something a little different that they can use that will work.
When choosing something to use, what's easiest is finding something that's of uniform thickness and roughly the same thickness as a cutting plate. It's best if it's firm, without too much give to it so that you can get a nice crisp embossing--you want an even pressure to be applied to the folder by the rollers. Softer stuff like fun foam and rubber gasket can work, and while it's definitely cheap and easy to use, the embossing isn't as crisp as what you get when you use something with very little give to it, like wood, acrylic, or even chipboard. Try it and compare--that's what I did. And as always, when you experiment, start thin and gradually work your way thicker with shims until you get the look you want--you don't want to end up breaking your machine or your plates.

As for embossing smaller folders, whether border folders or the smaller size folders made by any of the manufacturers, if you have problems with the edges of the folder being embossed, this is where using something narrower than the border folder or slightly smaller than the small embossing folder can be helpful (my examples are numbers 3, 4, 7 in the last photo)--no pressure on the edges means no lines, eh? After all, no one likes unsightly lines. ;-)

Addendum: A couple of folks have asked about the "sandwich" for the Cuttlebug. For embossing folders used with the Cuttlebug, the sandwich from the bottom up is usually A plate, B plate, embossing folder with card or card stock inside, B plate. Depending on what you use to selectively emboss, just plan on substituting that chipboard or wood die or whatever for one of the B plates (I usually swap out the one on the bottom.) and then adding shims until you're satisfied with the look of the embossing.