It was an accident when I found out how neat Memento inks could look when layered on top of each other. I'd inked up a solid image with Memento ink and discovered after I'd stamped it that I'd not covered the image as completely as I would have liked. OOPS! Well, rather than reink with the same color and stamp again, which would have worked since I'd been using a clear stamp, I used a different color and found that it could make a really neat effect! Now sometimes I stamp incompletely inked images on purpose so that I can overstamp in a different color. 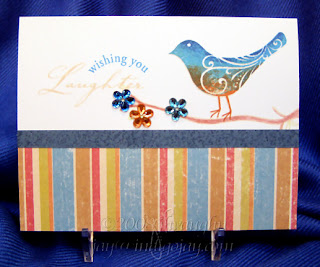 For this card I used Hero Arts images and a Hero Arts sentiment all stamped using Memento inks. I actually stamped the bird about four times to get the multicolor effect: there was a base layer of Desert brown, then Bahama blue, Danube blue, and Potter's clay.
But when I talk about the translucent quality of these inks, I mean the way that they layer over each other. You may need to click on the following image to enlarge it and see the colors well. 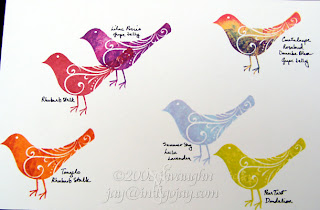 The bird image in the lower right is an example of what I'd been describing at the beginning of this post. I stamped it first using Pear Tart. You can see that near the swirl of the breast of the bird the ink did not completely cover the image and there was a speckled patch. I reinked the stamp with Dandelion and stamped again, filling in that "defect" and adding a bit more color and interest to the rest of the bird as well.
For most of the other images, I just played with different colors, stamping in one and then reinking, but not necessarily completely, in an accent color, and then stamping again. I like the vibrant colors and the way that they blend. The effect can be subtle, like with that blue bird, or it can be more wild, like that one in the upper right where I got a little carried away and used all sorts of colors. I also like the fact that after stamping my image, I can clean off any remaining ink by stamping it on scrap paper a couple of times and then apply another color without contaminating the next inkpad. Makes stamping these types of images very quick and easy and a lot of fun.