thinking of you, part one

Ahhh, the urge to make some cards came on earlier. I pulled out the Making Memories Slice machine since I recently got my hands on the Studio Expressions design card and I wanted to play with it a bit. I also used some of my old stand-by techniques. 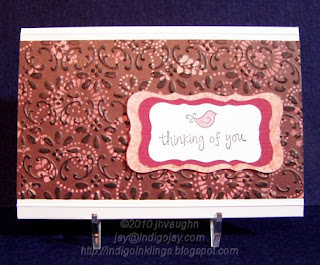 For this card I took a scrap of designer card stock and ran it through my Big Shot inside the Stampin' Up!/Sizzix Finial Press textured impressions folder. I accented the embossing with some Tuxedo Black Memento dye ink applied direct to paper and then adhered the layer to my card front. I added the score lines to my card using my Scor-it. I cut the labels using my Slice and a selection from the Studio Essentials design card, layered them and then attached them with foam tape to pop them out a bit. The stamped image is by Studio G and stamped and colored using Memento inks.
Interestingly, I'd made a second card with a similar sentiment, only in French. Sheer coincidence! I didn't even realize it until later. But I'm going to hold off on posting that one for just a bit. It ties in with something else that I'd worked on this week. Don't want to say more about that for the moment though. :-)
Now it's about time to see how Team USA will fare in hockey. I should be able to catch the 1st period before heading out on the afternoon drive to school.
Musings posted by Jay at 1:33 PM